Update: Linda, pre-organized as always, set up a bequest at the University of Waterloo to establish two new student awards. Learn more or join me in donating here.

Let me tell you about my friend Linda Carson, who tragically passed away last week from ALS. She was known for an astounding variety of creative endeavours, but I want to mention one in particular – the University of Waterloo Varsity Briefcase Drill Team.

My thanks to VBDT member Ken Jones for hanging on to this video, which was shot by the basketball team’s videographer in 1987.
Here are two performances from 1987 – the inaugural, with six VBDT members and the UW Warriors Band, and a repeat engagement where the team had expanded to 10 and added a second number to the show. 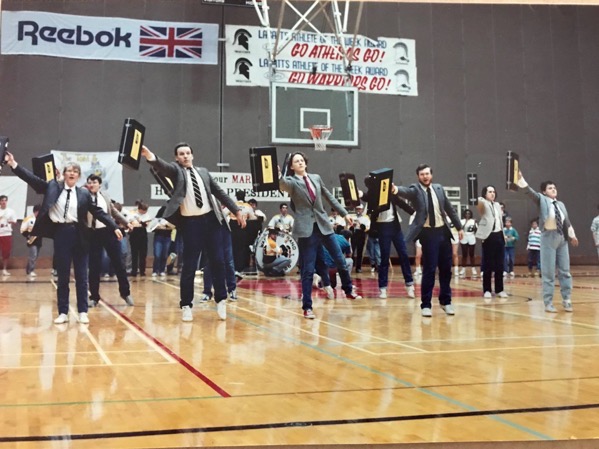 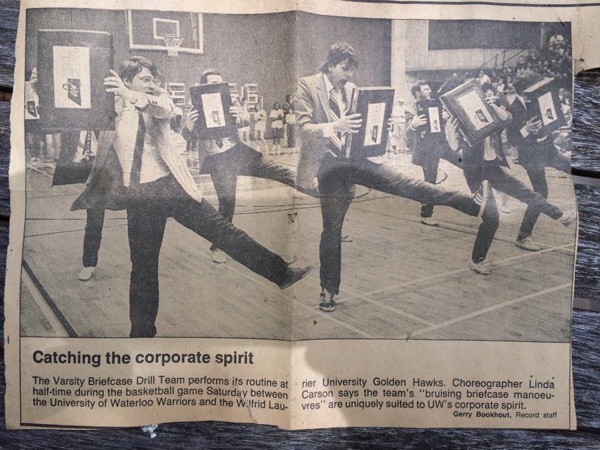 and a revival of the team in 1999 – with Linda in the middle and the Warriors Band scattered around the edges. 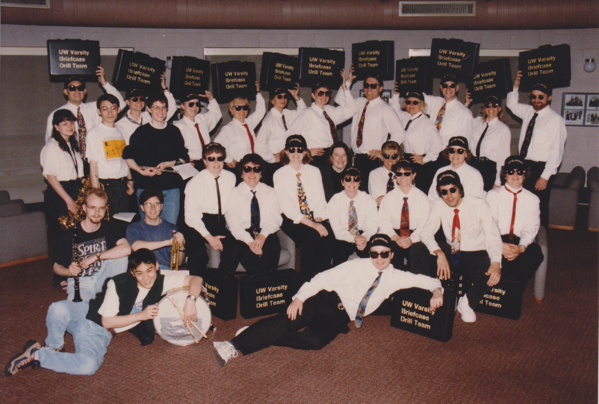 Linda’s passing comes far too soon, and it’s not fair, but I hope I can face a challenge like that with the humour she showed. Check out this Twitter thread where she announced the ALS news to us all – here’s the first part (but you should read the whole thing.)

It’s also known as Lou Gehrig’s disease. So I’ve got a disease (boo), named after a baseball player (yay?), but he was a Yankee (BOO!).

I knew Linda multiple different ways at Waterloo. We were both Mathies, although she moved on to fine arts, which kind of left me agog. You can be good at math AND at painting and sculpturing and drawing? I had no idea.

We both wound up involved in FASS, too, Waterloo’s annual Faculty, Administration, Staff and Students show. This was a big original show, supposedly a musical “comedy” although I think a lot of the jokes were way more fun for the participants than they were for the audience. Linda was a theatrical jack of all trades. Actor, choreographer, director – and complete amateurs like myself were always welcomed into the production and somehow I even became Musical Director for the 1985 and 1987 shows. Wait, what? I get to conduct the band? in the orchestra pit? And it moves up and down hydraulically? COOOL.

I couldn’t believe that I got to hang around with actual creative and talented people like this! Surely there must be some mistake… but that’s one of the great things about university, how you can become friends with people with wildly different backgrounds and ideas and it’s all very welcoming and fun and somehow we all learned a little bit about math at the same time.

So one night, Linda, and Paul McKone, and I were hanging around in the University of Waterloo Grad Club – an old farmhouse on the middle of campus – and somehow a tremendously silly and amazing idea was born there.

Let me quote from the June 2 1997 issue of the UW Daily Bulletin, a decade after the birth of the VBDT when it was prepping for a repeat performance –

Hot dog! The faculty, staff and retiree “birthday party” for UW is set for tomorrow at Federation Hall, running from 12 noon to 2 p.m. The barbecues will be hot, the music will be cool, and the return of the Varsity Briefcase Drill Team is promised — what more could anyone ask?
Well, maybe an explanation of the Varsity Briefcase Drill Team wouldn’t be out of place. Linda Carson was in its founding “in 1987 or thereabouts”, and does her best to blame Paul McKone:

“We were sitting in the Grad Club,” Carson says, “Having a refreshing lemonade — as I recall — and bemoaning the dreadful conformity of the whole notion of cheerleaders. It just didn’t seem to represent the true spirit of the University of Waterloo. Paul said something flip about how the true UW spirit would be represented by a bunch of people in suits throwing briefcases about.
“It sounded like a great stunt,” Carson continues. “I’d done a lot of goofy choreography for FASS over the years. I got a few people together and we started working on weird stuff you could do with a briefcase. Paul was a member of the Warriors Band so he arranged to have them play for us. Steve Hayman came up with a musical arrangement and everybody got to work.

“The team rehearsed on the pavement outside the Math building. We had a rotten little tape deck and an atrocious recording of the Warriors Band. The team — all six of them — never heard the Band play live until they actually performed the number.”

The UW Varsity Briefcase Drill Team made its debut, unannounced and unauthorized, at halftime at a basketball game, November 1987, in the PAC. Nobody knew they were coming but the Warriors Band. They marched onto the court in suits and sneakers, and performed their signature piece: Nine to Five. “The crowd had never seen anything like it, but from the moment those six people entered that huge gym in formation, everybody got it. I think that’s still the greatest thing about it. UW knew right away what the team represented: ourselves,” Carson remembers today. “I’m very proud of that moment, when the University of Waterloo proved it can laugh at itself.”

I remember that first performance well! Six VBDT members marched out onto the floor as the Warriors Band played my arrangement of Dolly Parton’s 9 to 5. It brought the house down. And the VBDT was invited to return – only bigger!

Something possessed me, a two-left-feet uncoordinated klutzomatron, to join. The team expanded to about 16 people and returned to another basketball game for the same schtick, again, that you can see in the picture at the top.

There’s the band behind the VBDT.
I recall the game was telecast, and the cameraman was given instructions to film the shenanigans but he wound up filming the Warriors Band the entire time, oblivious to the synchronized briefcase drill going on behind him.

So there might be video out there somewhere. i’m still looking.

And I remember another writeup of a VBDT rehearsal, which was about the only time I was ever actually spotted in the UW’s dance studio. Oooh, this floor is bouncy. Hey, look at all the mirrors! What is this ‘bar’ for?

Linda sent me this photo from a 1987 rehearsal –

Back row, L to R: Ken Jones, Dave Till? Heidi Leblanc? Peter Houston? And somebody of whom I can only see a shoe. John Sellens maybe?

Photo from the UW Imprint, January 22 1988. Captioned: Waterloo’s varsity Briefcase Drill Team, fresh from its triumphant debut at the Naismith tournament, will perform again at halftime during the Warriors basketball game against Laurier January 30 at 2 p.m. in the PAC.
Shown here in a recent practice, the Varsity Briefcase Drill Team provides a brand of entertainment and team support uniquely suited to UW.

The Varsity Briefcase Drill Team encourages you to support Warriors basketball, and looks forward to seeing everyone at the game. Linda Carson is the team’s choreographer.”

A photographer for the UW Gazette took what was probably the least flattering photo of me ever – not the one above, one even worse – for another writeup – and in that story, Linda mentioned that all the VBDT moves were named after computers on campus and the photo showed us `practicing the bruising wateerc manoeuvre’.

Gotta dig that article up.

Perhaps my strongest memory is that Chris Kitowski, who’s in the center in the light gray jacket in the photo, had a briefcase with a latch that would always pop open at the exact same point in the routine. Always. Every time. And Chris would click it back shut, on tempo, right on the beat, at the same point every time. Every. Single. Time. It was hard not to laugh.

I moved away from Waterloo, to Indiana for a few years, but the VBDT kept going, and appeared in a Santa Claus parade, and then, to my great delight, reformed and performed at my (first) wedding reception! (That particular marriage did not last; I don’t think it was the Varsity Briefcase Drill Team’s fault though.) And the team reformed for UW’s 40th anniversary in 1997.

I know many of us in the VBDT held on to our decorated briefcases for years, just in case we were called on to serve our university again.

That was just one thing Linda did for us all.
We can argue about who actually came up with the idea, but Linda made it happen. So many great endeavours are all due to someone who took the time to implement a silly idea, rather than just laughing it off and saying “yeah, that would be cool.” It was cool. And Linda is why.

Linda even had a law.

Carson's Law: There are fewer rules than you think.

“There are fewer rules than you think.”

Thanks, Linda, for proving that.

We’ll all miss you, Linda.

Search? Seriously? You want to search this?